Raison d'être for this Corrigenda Page

At various points in an engineer's work errors may be found in published engineering texts. These may be due to an error in the production of the publication or due to an error by the author of the publication. Publishers may issue an erratum for a production error and a corrigendum for an author's error. In some cases even though publishers have been informed of errors in texts no corrective action is taken. This situation leaves engineers at risk of perpetrating the same error over and over again and is not really acceptable particularly if the error means that the result is non-conservative. As such RMA are providing this web page as a repository of known published errors.

This error (which is probably typographical in nature) is in the minor (transverse) moment at the centre of a rectangular plate, simply supported on two opposite sides and loaded with a uniformly distributed load. The tabulated moment for an aspect ratio of 0.5 is some 16% below the correct value, i.e., the error is non-conservative. 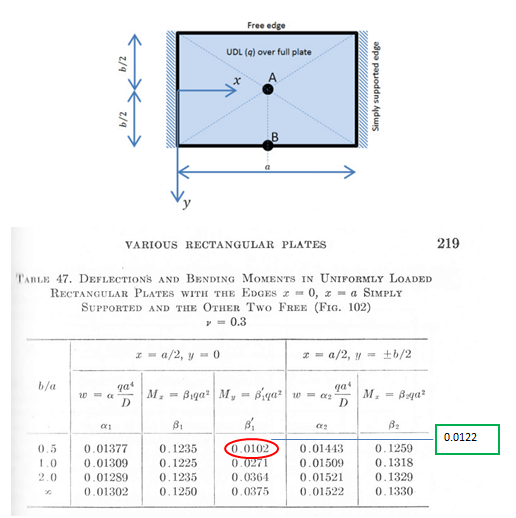 With regard to the engineering significance of this finding, the error leads to an under-prediction of the minor (transverse) component of the moment at the plate centre. The engineer designing a steel plate might use the moments to calculate the von Mises moment and ensure that this is below the yield moment for the steel being used. Since the von Mises moment is greater at the centre of the free edge (point B) than at the centre of the plate, then provided the engineer notices this, the erroneous value in the table would never be used. For a designer of a reinforced concrete slab however this number may well be used to size the reinforcement lying parallel to the y axis and an under-prediction of some 16% might lead to a situation where the structure is pushed out of the elastic region and into the plastic region. The degree to which this will occur should however be well within the ultimate capacity of the slab but may be undesirable in terms of serviceability issues such as cracking of the concrete.

This finding has been thoroughly verified and published in: