This article was published in the following magazines:

The yield-line technique is the traditional method of determining the (flexural) collapse load of reinforced concrete flat slabs and steel plates. Most civil/structural engineers will have encountered the technique during their undergraduate education and will be familiar with the concepts. Some may also have used the technique in earnest for the design and/or assessment of an actual slab.

The technique is alluringly simple to apply in that the engineer only needs to conjure up a ‘realistic’ collapse mechanism comprising a set of yield lines then to calculate the corresponding collapse load by balancing external work as the loads displace and internal work as the yield lines rotate against the plastic moment (calculated from the chosen reinforcement). When the technique is based on work concepts it is often called The Work Method. Limit analysis, such as the yield line technique, usually presents the collapse load in terms of the non-dimensional parameter which is known as the load factor and is defined as the collapse load divided by the design load, and should generally be greater than unity.

In terms of limit analysis plasticity theorems the technique is an upper-bound approach so that unless the engineer’s collapse mechanism is the theoretically correct one, the predicted collapse load will be greater than the theoretically correct value. It is this upper-bound nature, where poorly chosen collapse mechanisms lead to unsafe (non-conservative) predictions of the collapse load, which makes solutions produced by the technique difficult to verify (how unsafe is the collapse load?) and therefore potentially unpopular with those thoughtful engineers who want to sleep soundly at night!

“Yield line design appears to provide a great opportunity for more competitive concrete building structures, provided the current barriers of lack of familiarity and confidence in its use are overcome. If the opportunity is to be grasped then the concrete frame industry should present designers and the wider construction industry with comprehensive design guidance and design aids to instill confidence in its use.”

In response to the BRE’s findings The Concrete Centre published Practical Yield Line Design as a guide to practising engineers. The guide deals with the issue of potentially unsafe solutions in a pragmatic manner by introducing the 10% Rule:

“A 10% margin on the design moments should be added when using the Work Method or formulae for two-way slabs to allow for the method being upper bound and to allow for the effects of corner levers.”

The 10% Rule is easy to remember and use and, in the sense that most published yield line solutions are no more than about 10% above the theoretical value, has generally served practicing engineers well. However, it is a rule based on empiricism rather than theory and, as with many such rules, counter-examples may be found where the rule is violated. This technical note presents one of a number of known counter-examples to the 10% Rule. The Landing Slab Problem was originally considered in 1997 by two experienced engineers exploring improvements to the yield line technique. A yield line solution for this slab was published which, with the benefit of state of the art software available today, shows the published collapse load to be over 40% greater than the theoretical value. The provision of such engineering software tools, which can be used with confidence by practicing engineers for arbitrary and novel slab configurations, now enables the BRE’s and The Concrete Centre’s aim of encouraging more economic design of reinforced concrete slabs through limit analysis techniques to be realised. 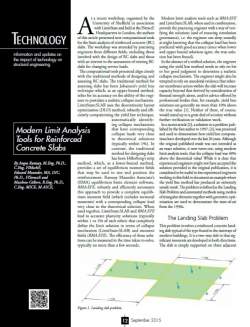 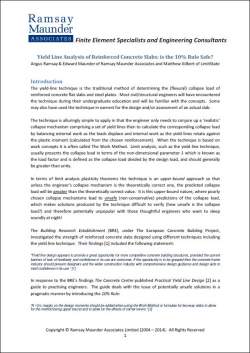