As anyone who attended last year’s NAFEMS World Congress (NWC2015) will have observed, the sophistication of computational simulation software and hardware is moving ahead at an extremely rapid pace. In watching presentations and speaking to delegates, a new variant on the familiar phrase ‘the democratisation of knowledge’ was heard for the first time by the author. This phrase was ‘the democratisation of simulation’ and it was understood, by the author, to mean something like the acquisition and spread of simulation tools amongst the non-specialist practising engineer.

There are obvious significant commercial advantages for engineering companies embracing and utilise numerical simulation in their design processes. If the democratisation of simulation means the development of bespoke software tools for the design of a particular product that encodes sound simulation governance principles then this is a laudable aim. The tool will be safe for use by any practising engineer and it will preserve the specialist design knowhow of the company into the future. A more worrying trend, though, which might also be described as the democratisation of simulation, is the selling of cheap and cheerful generalist finite element software or, possibly, access to such via the cloud. The reason for concern here is that it raises the spectre of all sorts of verification issues with the finite element software and the distinct possibility of finite element malpractice by non-specialist users of the software.

Whilst the European Court of Human Rights would, no doubt, baulk at such a retrograde idea, the practising engineer might best be served by adopting the Napoleonic Code of Jurisprudence for the results of a numerical simulation: 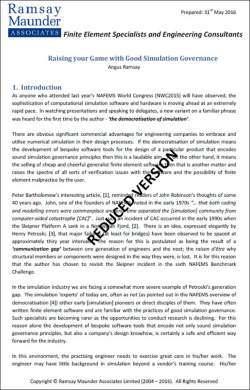 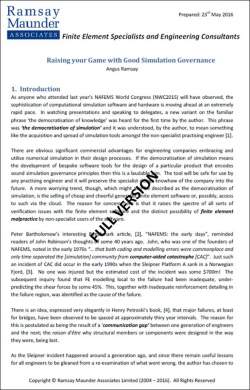