Design against Burst of Rotating Discs

In 1944 a study was conducted into the burst of rotating steam turbine wheels or discs. The speed at which burst occurred was found to correlate with the speed at which the average hoop stress reached the ultimate tensile strength of the material and an empirically derived formula for the design of turbomachinery discs was born.

A study of the burst of parallel sided discs was conducted in 1948 and this showed poor correlation between the burst speed and the average hoop stress reaching the material UTS.

With modern finite element software it is possible to determine the plastic limit speed through numerical simulation adopting an incremental approach and using a elastic-perfectly plastic material model with either the Tresca or the von Mises yield criterion. If this is done then the 1953 results can be reproduced, thus verifying the approach, and the plastic limit speed determined for other forms of disc geometry. 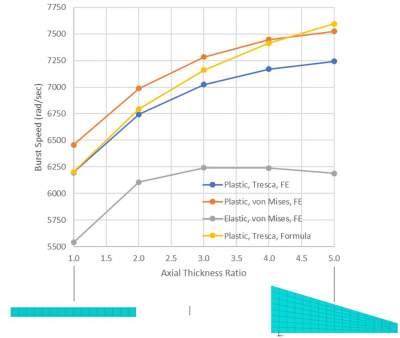 Using FE it is rather easy to show that the empirical formula of 1944, even when replacing the UTS with the yield stress, breaks down for disc geometries which are not parallel sided, with the formula offering a non-conservative prediction of the burst speed.

The points presented above have formed the basis of a NAFEMS Benchmark Challenge (Number 8).

This project will study the question of predicting the burst of rotating discs in further detail with the aim of providing a more scientific approach to the rather outdated approach used in the industry today which owes more to engineering folklore than the scientific method.

Dr Haofeng Chen, Reader in Mechanical and Aerospace Engineering at the University of Strathclyde, Glasgow, UK.