Plates are often important members in a steel structure and in Limit State Design, the engineer needs to consider the Serviceability Limit State (SLS) condition of maximum displacement and the Ultimate Limit State condition of plastic collapse, a sound design needing to satisfy both these conditions. Depending on the plate configuration considered, loading, supports and plate shape, size and thickness, one or other of the SLS and ULS conditions will govern the design. Even in cases where the SLS condition governs the design, the ULS condition needs to be determined in order to document the collapse load for the client and the insurer of the structure.

The practising engineer is poorly served when it comes to published data for the plastic limit load of steel plate members. Whilst the published results are generally conservative, they are often overtly conservative to such an extent that in the design of such members, more steel is being used than is actually required and in the assessment of existing designs, unnecessary design modifications are being specified as a result of the under-prediction of the existing strength.

Data published by the Steel Construction Institute (SCI) in their Steel Designers' Manual (SDM), for example, offers the practising engineer limiting loads based on archaic and inaccurate linear-elastic representations of plate behaviour. Data published in Roark's text 'Formulas for Stress and Strain', do provide plastic limit loads but these are based on rather crude limit analysis methodologies from some thirty years ago. They are also based on the now realised erroneous assumption that yield line analysis, which explicitly adopts the square yield criterion, is appropriate for steel members which are more accurately represented by the elliptical criterion of von Mises.

The status quo then is that the practising engineer cannot accurately design or assess a steel plate member based on currently available published data. The result will be conservative but may, due to the overtly conservative nature of such data, lead to the specification of more material than is necessary for the task in hand. This should be of concern to the practising engineer who must, nowadays, consider, in addition to SLS and ULS conditions, the economy of his/her design.

Limit analysis of steel plate members can be undertaken through conventional finite element methods using an incremental approach and adopting a linear, perfectly plastic material model. In the hands of an expert this approach can produce reliable results albeit at significant computational expense. In the hands of an inexperienced engineer the veritable plethora of numerical issue that need to be considered in order to obtain reliable and accurate results make this approach non-viable.

Nonetheless, both conditions always need to be considered so that

Nonetheless, both conditions always need to be considered so that

In Limit State Design, the Ultimate Limit State (ULS) condition of plastic collapse generally needs to be assessed. This requires the determination of the plastic limit load and a conservative value for this may be obtained by limit analysis. A limit analysis solution is considered to be conservative since the strengthening phenomena of strain hardening and membrane effects are not considered. 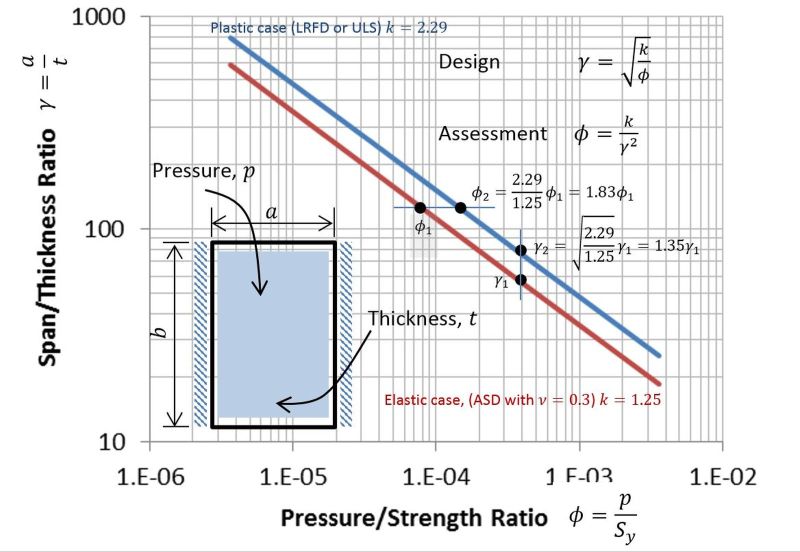